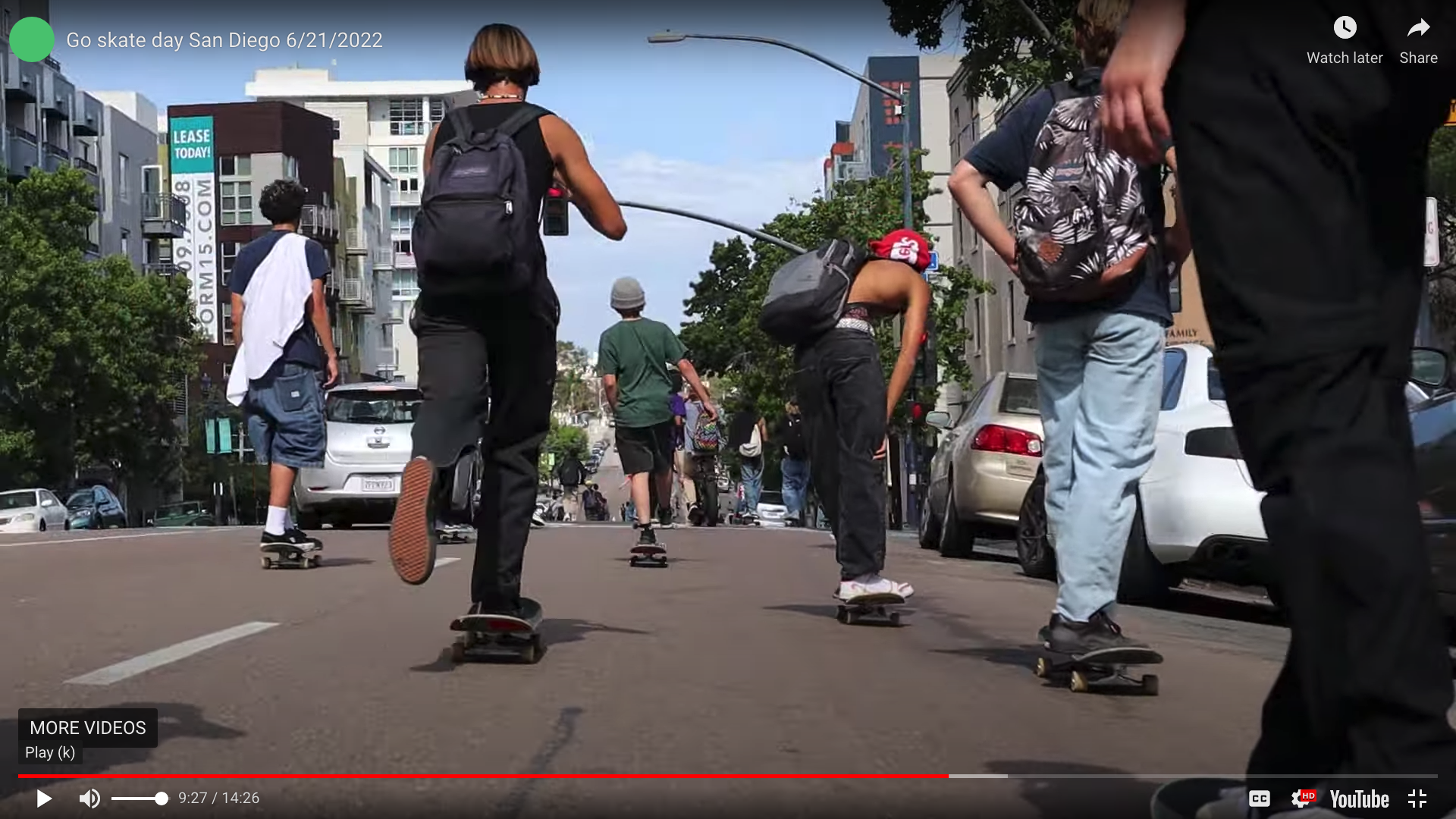 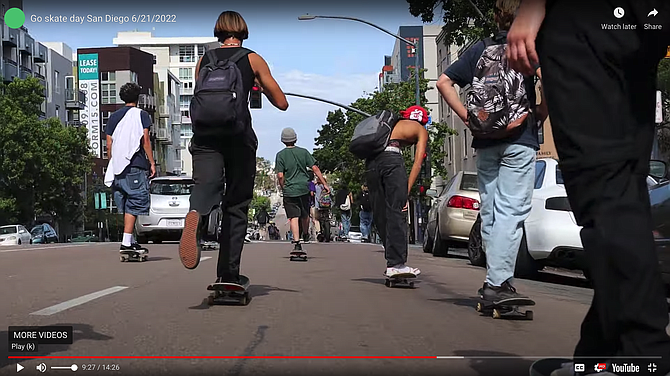 “When they (the cops) weren’t there, several cars tried to lurch at us in anger.”

At about 2 pm on June 21, Amanda Vazquez Defran heard a peculiar noise below her Banker’s Hill home balcony. “I work from home, so I get a front row seat to a lot of the strange things that happen in our city,” she said on June 26. “My first thought was that it sounded like a gigantic swarm of bees.” As she gazed outside below, she saw “about four-to-five blocks of kids — maybe 500 [skateboarders].” 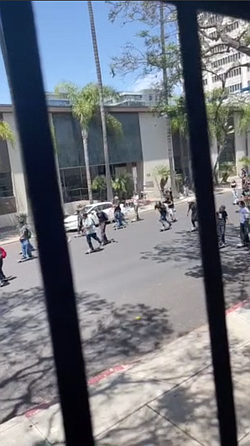 The “music to her ears” was derived from hundreds of polyurethane wheels, their swishing ball bearings and thumping plywood decks — skateboards all propelled in unison moving along the Laurel Street and 3rd Avenue streets and sidewalks. 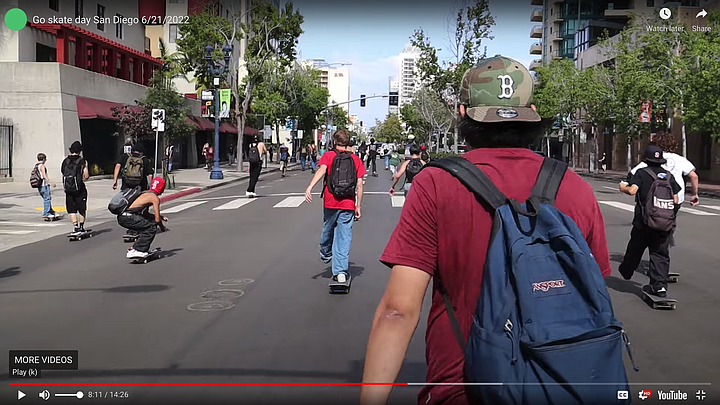 “It’s rare that you can skate with such a big group,”

“I couldn’t believe the amount of skateboarders coming down the road,” she continued. She pulled out her phone, activated her camera, and started filming. “This is only about half of it,” she explained, “I didn’t get my phone out until they had already been skating by — it was really cool!”

There was a good chance that 20-year-old Summa Amica was filmed skating in the group. “Not sure if we were the people in the video,” he said on June 26, “but it looks like it.”

Defran continued, “I waved at the skaters as they passed because I was so excited.”

Amica couldn’t wave back, as one of his hands held a camera, while the other helped maintain his balance as it swayed in sequence with his one foot pumping and propelling him forward up and down the downtown streets, sidewalks, alleys, and parks. “It’s rare that you can skate with such a big group,” he said. “It doesn’t happen often, so when it does, there’s a real weight to it.” 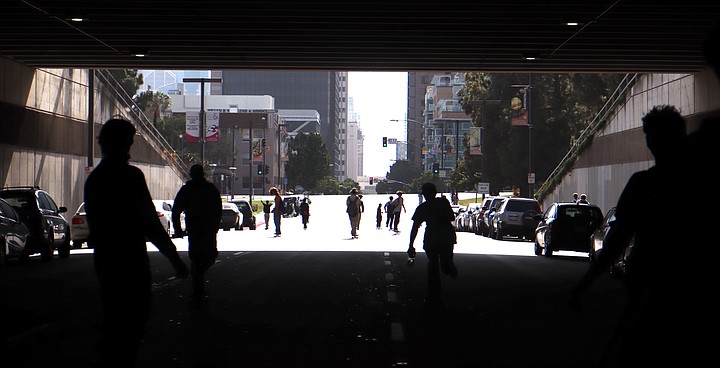 June 21 was #GoSkateDay, or Go Skateboarding Day, an international day to commemorate the sport of skateboarding. It happens to be the longest day of the year, providing the skateboarding groms and grownups more sunlight to skateboard and stir up a buzz to draw in more people into the hobby turned professional sport turned 2020 Olympic event.

Defran, a 36-year-old onboarding specialist, wants to get into the skating lifestyle. “I was hoping to catch a glimpse of a few GRL SWIRL members [in the footage], but was surprised that there wasn’t very much female representation.”

Amica’s footage and photos of his group of younger-looking skateboarders show more diversity. In the footage, by about 4 pm, they make their way to a steep hill atop B Street where it crosses 21st Street, about a quarter mile east of San Diego City College. The skateboarders then would take turns bombing the hill coming down B Street towards 20th Street. Some skateboarders appear to be traversing at 25 miles per hour before speed wobbling and then abruptly jumping off. Others sat on their wooden boards with both feet jutting out in front to slow the roll of the wooden board’s velocity — an old skate custom done by 1970s groms who skated on bright yellow banana boards. 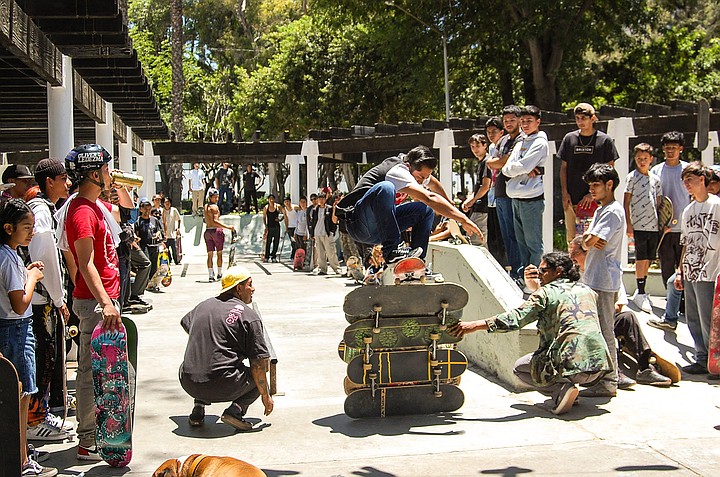 In Tijuanaskaters would skate in the middle of a circle and try to push one another outside of the area.

“A few people fell, but there were no serious injuries,” Amica continued. “Only some road rash which is common when hill bombing.” A blond hair skater made it down the hill, purposely slid his board, then skated by 20th and continued to 19th, where suddenly a dark-colored SUV drove by, heading onto the I-5 onramp across the street; the skater missed the SUV’s rear bumper by less than a second, it seemed. He held up his hand, showing the purveyors up the hill that he was OK.

A police officer then posted up on 19th and B, monitoring the situation. A skater descended, then as he approached the police motorcycle, he ollied in front of the cop, who appeared to flinch or attempt to catch the skater if he fell.

At about the same time, skateboarders connected at the Skate-Park San Angel across the border in Tijuana. It’s a skatepark about 12 miles southwest of the San Ysidro Port of Entry. Here, Freddy Palazuelos, an old-school skateboarder, documented #GoSkateDay via photos posted on his Sports Friends page.

“There were about 250 of us skateboarding,” he said. “Manos Sucias Tijuana sponsored the event.” That translates to “Tijuana Dirty Hands,” a Tijuana skate and lifestyle shop. The staff provided the skateboarders with free decks, grip tape, stickers, and tees at the park. One skating custom that differed across the border was the skaters would skate in the middle of a circle and try to push one another outside of the area off their skateboards.

Similarities between San Diego and Tijuana skate scenes were evident. Both groups would stack up boards vertically and take turns ollieing over them; they’d line boards along the ground and see who could jump and clear the boards — some skaters jumped what appeared to be 12 feet. Finally, one brave skateboarder would lie on the pavement, and the skateboarders would take turns jumping over him.

Back across the border, Amica’s group headed into the San Diego City College tunnel and made their way down Pacific Highway.

“My husband and I saw them heading west on Broadway, crossing Pacific Highway,” Rebecca Basilio said. “There were maybe 75-100 and seemed to be mostly high school age. I thought it was kinda cool.”

A University Heights dweller wasn’t as “chill.” She posted on the NextDoor app, “Check your local news …. They destroyed the 7-11 on Grape Street and continued to do damage near 20th and B. I’m sure it’s on Tik-Tok [because] well, it’s so cool to damage things. F these kids.”

I couldn’t find the corresponding news clip on a quick search online.

Defran continued, “From what I am told, the city organized streets to be blocked off in order to accommodate the skaters.” Maybe that was the case on Laurel Street by Defran’s house, but by the time Amica and his group of skateboarders reached Market Street, in the midst of the skyscrapers downtown — the streets were wide open with not a police patrol car in sight.

On Amica’s footage, the skateboarders are heading westbound on Market Street. At times, they’d taken up all the lanes skating against incoming traffic and weaving in between moving vehicles. Some drivers panicked and honked; someone in the footage quickly fired back, yelling, “Fu– you”

Amica continued, “the cops only blocked off the road so no one would get hit by a car. But, when they (the cops) weren’t there, several cars tried to lurch at us in anger.

“No one was arrested or fined. We did a big loop around the downtown area. It started at Balboa Park and ended there.”

Inside the San Diego District Attorney’s Campaign Against Antifa

Alphonzo Rawls in the Latest Episode of ‘Good Work’

Alphonzo Rawls in the Latest Episode of 'Good Work'