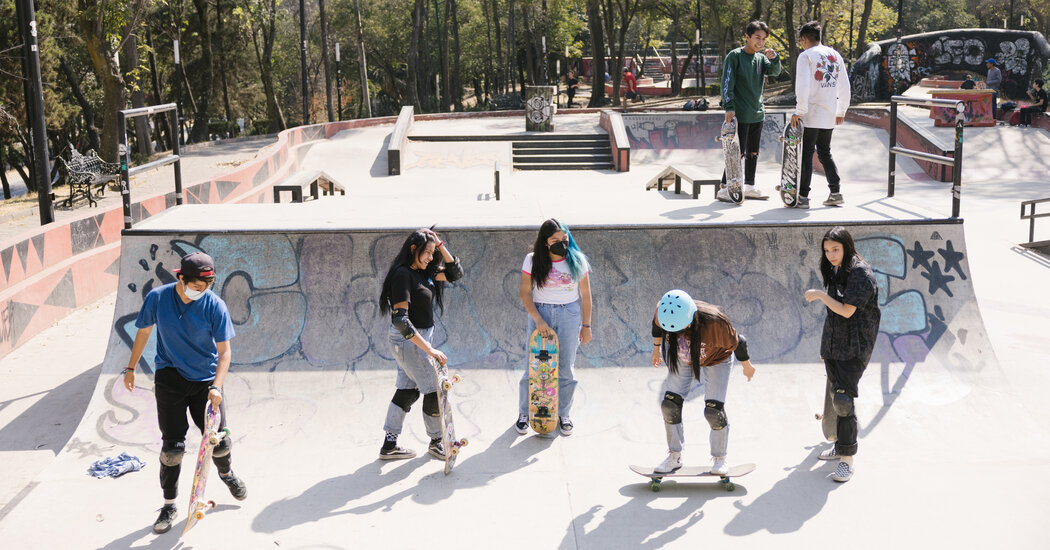 MEXICO CITY — One year ago, Carolina Altamirano left her home in Oaxaca City, Mexico, where she had been skateboarding for nine years, in search of opportunities to grow her skateboarding career.

In years past, this would have meant relocating to Los Angeles, New York City or even Barcelona, Spain. Instead, Altamirano moved to Mexico City.

“There’s a lot of skate parks, and they’re building more,” she said of the city, which has quickly become an international destination for the sport and an incubator for an impressive roster of athletes as the skateboarding scene blooms. “The skateboarding community is strong here. If you come across someone you don’t know who is carrying a skateboard, they will greet you and talk to you.”

Among them is Itzel Granados, one of the highest-ranked skateboarders in the country and somewhat of a local celebrity in Mexico City skate parks. In November, Granados, 20, finished in second place at the Junior Pan American Games women’s street competition. Before that, she placed third in the renowned Exposure skateboarding contest. She hopes to qualify for the 2024 Paris Olympics, the second time skateboarding will be in the Games.

“The skateboarding scene is centralized in Mexico City, a city that is home to the best skate parks in our country,” Mariana Muñoz, the director of Mujeres en Patineta, said. “The social openness that exists here, as well as the women’s movement, have allowed women’s skate to grow in an unprecedented way.”

The city’s newfound status as a skateboarding paradise was hard won. Olga Aguilar, who has been documenting the skateboarding scene in Mexico City since the 1980s, said accessibility was an early obstacle. “The first problem was that it was hard to find a skateboard,” she said. “There wasn’t a skate shop. If you knew someone going to the States, you would give them money so they could bring it back. It was also expensive at the time.”

For women, skateboarding also carried a stigma that Aguilar and others have been slowly dismantling. The sport was seen as inherently male, so it was frowned on for women to participate, she said.

“We had to hide our skateboards because our mom didn’t want us to skate,” Aguilar said. “There was not a skate park at the time. In the late 1970s, there were no places to go and learn. It had to be on the street.”

The Mexican government started building skate parks in the 1980s in an effort to restore public spaces, and the tide shifted in the decades that followed. The scene is becoming increasingly diverse.

“The atmosphere changed when availability and skate shops were opening. Nowadays, there’s access for everyone to get a skateboard, and it’s not looked at as it was before,” Aguilar said.

Last year, the Mexican skater Oscar Meza returned to Mexico City after spending most of his adult years skateboarding professionally in Los Angeles. “This city is providing a real raw new generation of people really enjoying skateboarding. I felt like I was losing that in a way.”

As a teenager in Los Angeles, Meza felt some discomfort from being a Mexican skateboarder. “They thought we were like weirdos. Like you’re doing a white kid sport.” But as he has grown older, he’s watched the sport become embraced and flourish in his community. “Now it’s like you’re not cool if you don’t skate,” he said.

The architecture and idiosyncratic building styles in Mexico City make for thrilling skateboarding terrain, Meza said, though, like elsewhere, the police and security guards sometimes intervene.

“In Los Angeles, you go to a spot, and the handrails are the exact same size. Everything is so regulated. That doesn’t exist here,” he said.

As the skateboarding scene grows in Mexico City, so, too, does international interest. It has become a travel destination for skateboard enthusiasts, professional athletes and sponsors alike. In 2014, Nike Skateboarding, in conjunction with the Mexican government, built an Aztec-inspired skate park to promote access to young skateboarders in the city. In early December, Vans built a flagship skate park and event space in the Mixcoac neighborhood of Mexico City.

Granados is at the forefront, even if she hit a speed bump in the past year. Last summer, in qualifying in Rome for the Tokyo Olympics, she fell and lost her chance. “I hit my head,” she said. “Three medics told me: ‘You can’t compete. You can’t do this.’ And that was it.”

The setback has not slowed her down. She is keeping pace with the growth of her sport in Mexico City, where there is increasing industry interest and government support beyond grass-roots efforts. Granados hopes to skate for years to come, until, she said: “I break my knees and really can’t do it anymore. Until then, I will keep skating.”

And she will have more places to train, alongside a growing community of skaters like Altamirano.

“I love it,” Granados said of training in Mexico City. “It has parks for beginners to skate and intermediate and advanced levels. I think that’s what makes a skate park perfect, no? When it’s for everyone.”

Naim Daniel not amused being accused of joining Illuminati

Naim Daniel not amused being accused of joining Illuminati