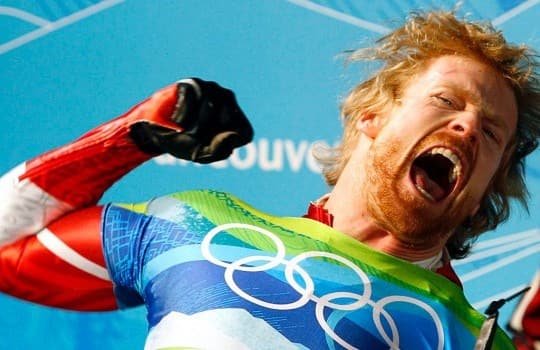 Forbes: He did it his way, that’s for sure. He should play Frank Sinatra because he kept his cool and was Jon Montgomery the whole time.

Bannon: We were indoors and we heard this roar. We’re like, ‘What is going on? Like, what has just happened?’

Cicoria: We spent a long, long time taking photos of family and friends, and then we jumped into a truck and they took us down to anti-doping [testing].

Forbes: After the drug test, he was finally ready to go and someone said, ‘Let’s get on a gondola to go down because you’ve got to get on CTV.’

Montgomery: I was still in my speed suit having just completed doping control, done that press conference, still had my helmet. And we began to walk to the town square, where there was the broadcast stage for CTV.

All of a sudden the camera’s in your face, [the cameraman]’s walking backwards. There’s a bit of a police escort.

Cicoria: You could see the people and we’re like, ‘Holy s–t,’ where do we have to go? And so at that point, it was just like, ‘Oh man, this can be cool.’

Forbes: There’s people coming from every direction and we’re like, ‘Whoa, what is going on?’ And then RCMP start getting around Jon and us and there’s thousands of people surrounding.

Cicoria: Jon’s out in front. He’s got a flag, which he had been wearing like a cape. And at that moment, you’re just starstruck.