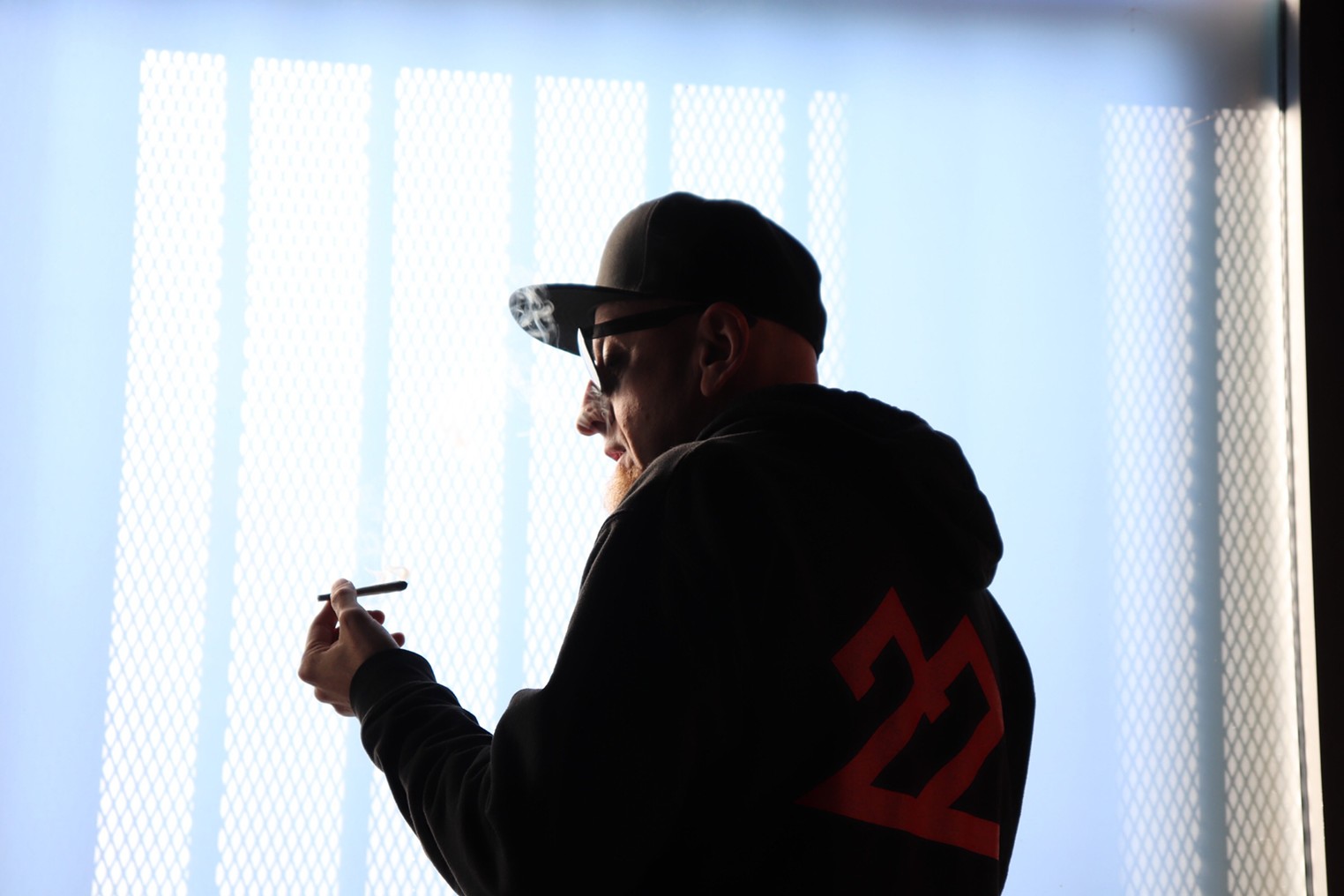 Shavo Odadjian, bassist and founder of System of a Down, skated into The Churchill in Phoenix to celebrate the launch of his four new 22Red concentrates — and Go Skate Day.

That night, June 21, Odadjian and his 22Red crew skated with their buds from Cowtown Skateboards and hundreds of skaters of all ages in front of The Churchill, where there was a street skate course. They also skateboarded inside a nearby abandoned warehouse with ramps, handrails, quarter pipes — and loud punk rock and heavy metal music. On some of the music tracks blaring from the loudspeakers, the groms got a taste of Odadjian playing bass guitar — years before he and his SoaD bandmates copped a Grammy for “B.Y.O.B.” in 2006.

Before Odadjian took to the electric guitar and bass guitar, he rocked a skateboard at age 5. “So my parents would work two jobs [and we were] living in a little apartment in Hollywood on North Kingsley Drive,” he recounted in a Phoenix New Times interview earlier that night. “And when they were at work, I would skate halfway, take a bus, and head to Venice Beach without my parents knowing — at 12 years old. I would skate with these greats, bro.”

Shortly after Shavo Odadjian skated inside The Churchill, he grabbed the skateboard. “So until today, I’m 48, I still see a curb, and I got that skater’s eye. I’m like, ‘Dude; I could do that.”‘

“I learned tricks like ‘no complies’ and ‘varials’ from the main guys,” Odadjian continued. “So until today, I’m 48, I still see a curb, and I got that skater’s eye. I’m like, ‘Dude; I could do that,’ even though I don’t do it. I don’t want to break anything because I play music.”

But Odadjian made an exception in front of The Brill Line’s whiskey, cocktail, and beer bar inside The Churchill. The Grammy award winner hopped onto his 22Red employee’s skateboard and busted tricks. The bar patrons cheered.

Not even winded, he continued, “That’s why being at events like this, and being the founder of these events, means so much to me because I relate with everyone around here. It’s just a big part of me. And when I started 22Red, it was like music, art, and skating. That was the goal. And look where it’s at after three years. Bro, [outside of the bar area] there’s like 2,000 people doing this.

Metro Phoenix parents and guardians lined up to meet with the rockstar-turned cannabis entrepreneur. Some fans brought their groms with a #GoSkateDay poster in one hand and a skateboard in another to get autographed by the bass guitarist. A local father requested not to be named as his “wife was not invited”; he brought a vintage cassette tape for Odadjian to autograph. The father continued, “I want to show our children how we musicians blew up in the 1980s-1990s by making demo tapes like this.”

In ’94, Odadjian connected with Serj Tankian and Daron Malakian, and the trio formed the System of a Down heavy metal band in Glendale, California. They’d perform at the nearby Los Angeles “it” spots in the ’90s. Then the “nu” and alternative metal music on their demo tapes made its way onto online music sharing platforms — Napster, LimeWire, and Kazaa — and was transmitted via the World Wide Web as we called it, and downloaded worldwide. Consequently, the System’s unique style of music went even more viral, including “Sugar” (1998) — and “Toxicity,” which would peak at No. 70 on the Billboard Hot 100 list. It would still be a few years before YouTube, and other social media platforms would somewhat replace the “demo tape” concept of marketing and promotion.

The kids and adults skated vert or ollied inside the warehouse, with staffs from 22Red and Cowtown Skateboards chaperoning.

A local mother, who goes by the Mrs.dabulite handle on Instagram, posted an IG photo of her carrying her daughter and Odadjian carrying her son as the son played with Odadjian’s signature rubber-banded goatee. She captioned the photo, “Thanks for being so awesome with our kids ….” Steve Lucero captioned their Instagram photo with the rock star-like father, saying, “My sons and I had the pleasure of meeting @ShavooDadjian yesterday!! Coolest mfkr ever!”

(In a previous interview with Forbes, a financial magazine, Odadjian reportedly said, “I don’t think you should smoke until you’re 21, because I think it stunts growth in youth. I don’t condone it.”)

A Los Angeles-based lifestyle brand focused on cannabis, fashion, music, and wellness, 22Red sponsored the free-of-charge street-culture bash from 5-10 p.m. It was a match made on cloud nine, as after the attendees took family photos with the System of a Down bassist, the parents or guardians kicked it and had a drink with him.

At the same time, the groms skated on the North First Street course, which was blocked off from incoming East Roosevelt and North Central traffic. Or the kids skated vert or ollied inside the aforementioned pop-up skatepark in the warehouse, with staffs from 22Red and Cowtown Skateboards chaperoning.

Gus Briseno, 27, a Tempe skateboarder for 16 years, spoke on the fusion of skateboarding and weed. “I think it’s a lifestyle that’s existed for a while, not to say it’s the norm of it, and not everybody who skates smokes weed. But I feel like they go so well together.” Not too long ago, some people participating in both lifestyles “have been outcasts,” he added. But since recreational cannabis use became legit in Arizona in late 2020, the same year skateboarding was scheduled to make its debut at the 2020 Olympics in Tokyo (then postponed to 2021 because of COVID-19), “it’s really cool to be a part of a community that accepts everybody.”

Skaters of all ages skated in front of The Churchill, where there was a street skate course.

This month, New Times reported on the Shred 22 and Portuguese Kush concentrates from the four newly launched 22Red line. Briseno, also a local sales manager for the 22Red canna-biz, spoke on the other two concentrates: Papago Punch, which is a badder, and K9, a sauce.

“So we get all the starting material supplied by Sonoran Roots,” he explained. “So the live resin product comes out super terpie.”

Sonoran Roots is an Arizona-based cultivator with a northwest Mesa 33,000-square-foot space and a Tempe spot with an extraction lab, where processed products and concentrates are produced.

Briseno continued, “The Papago Punch terps are good for like after skating when you’re trying to just relax after a long day out in this Arizona sun.” And if you’re sore or injured, “it’s just going to kind of ease your body pain, relax the mind a little bit, kind of help with the sleep.”

The K9 is “going to have THCA diamonds in there with the terp sauce. It’s like a hazy, gassy profile to it … and good for daytime [use],” he said. The company adds that the 50/50 hybrid sauce is a blend of Triangle Kush and Josh D OG, with plenty of bark and an aggressive bite.

And how does dabbing affect Odadjian when he plays his bass guitar?

“They don’t necessarily go hand in hand, but some like Shred 22 as it works well for songwriting and daytime use because it’s a sativa, which is rarer nowadays,” he noted. “With sativas, there’s definitely more of a chance that I’ll play music than with an indica.”

Earlier in the year, System of a Down performed at the Footprint Center in Phoenix.

That night, “I used my new, stained-glass, custom Warwick Streamer that I designed,” Odadjian continued. “I mostly stick to the same bass throughout a show, but I will switch if I need to tune.”

A 1 1/2-hour video of the Phoenix concert was posted on YouTube; of the nearly 90,000 views, many commented that Odadjian had the most energy in the group playing that January evening.

When asked if consuming cannabis makes him more creative, he responded, “I’ve always been a creative person, even without the smoking or dabbing. But what it does is it lets you focus. So if I’m ever not focused and I’m blocked, and I smoke, let’s say that Shred 22, here, it opens up little things in your brain that let you focus. So it helps in creativity because you can focus on what you’re doing at the moment. So it’s not like some guy that’s non-creative can become creative; it makes the creative become more creative. And yeah, so hence I endorse sativa. I love it to the point where it’s become religious.”

The Shred 22 concentrate is a 9/10 sativa dominant hybrid badder.

“So that relates to some of your video stuff?” he was asked.

“All of it,” Odadjian responded. “Yeah, I think a lot when I do it, and it makes you think, and it makes you come up with some crazy shit. Like from ‘Toxicity’ to ‘Aerials’ to ‘Question!’ They were all things that I came up with [for the music videos] under the influence of some type of cannabis.”

Besides playing bass and backup vocals for System, Odadjian is credited for directing the band’s cinematic and enthralling music videos. According to the Internet Music Video Database, he co-directed the three aforementioned music videos, and solely directed “Hypnotize.”

He added, “Daron Malakian wrote ‘Aerials’ the song. But the video, that’s me in the video. I’ve never told [of] this in an interview; I’m giving you something: so that little [alien] kid is me. No one knows that. I’ve always felt alienated. So I made him like a little alien kid.

“Bro, back then, it took me weeks and a lot of CGI [computer-generated imagery] money to come up with that face … nowadays, it’s a filter. Right? On Snapchat. Everybody’s like, ‘Who’s that little alien?’ I’m like, ‘I’m not going to tell you.’ But now, it’s like, so many years, 20 years later, I’m telling you [New Times readers].”

There’s no word when System of a Down will return to Phoenix, or if they’ll drop some new “wax,” but Odadjian will be skating back into town. The four 22Red concentrates that went out to metro Phoenix dispensaries earlier in June were the first four of 30 different concentrates the company will be launching.

“I thought it was a good introduction to our brand of concentrates, instead of dropping 20 and having you pick — I chose for you,” he said.

“An LP’s got 12 songs, and EPs got four songs; people bond with usually one to four songs, usually off of an LP. So I’d rather not waste anything and drop four, have you guys taste it, and let me know what you’re attracted to and what appeals more to the public. I use my music mentality towards this brand because I’ve branded System of a Down from day one. I was the one that started everything [when] I’ve managed System. … I came up with the first logo; I came up with the ‘Toxicity’ cover.

The red-colored “22” logo can be seen in “98 percent” of the dispensaries in Arizona, touts the 22Red company. With its flowers ranked No. 3 throughout the Grand Canyon State, Curaleaf and Harvest are 22Red’s largest customers.

Gus Briseno from 22Red, “So the live resin product comes out super terpie.”

Inside the San Diego District Attorney’s Campaign Against Antifa

Inside the San Diego District Attorney's Campaign Against Antifa